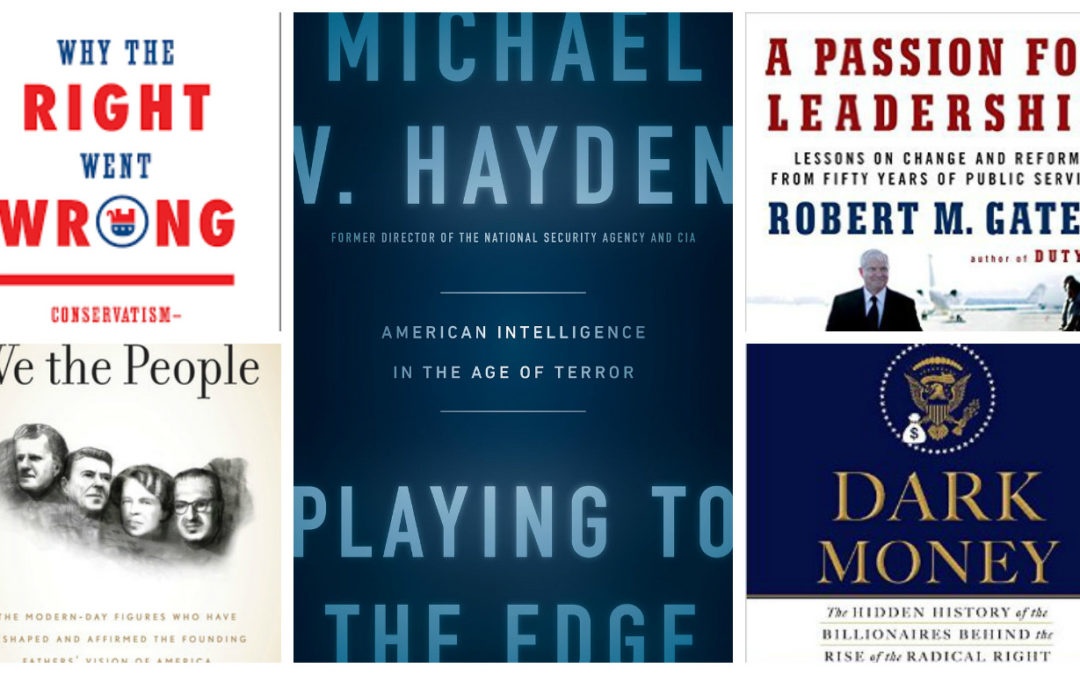 Every year is a good year to be politically informed, but 2016 is one particularly in need of enlightened citizens. As an election year with a lot seemingly at stake for both parties, debates, caucuses and primaries have torn through public consciousness like twisters through Kansas. And like tornadoes, candidates often leave more confusion and clarity in the wake of their movements.

Luckily, we’ve still over half a year until the general election: plenty of time to absorb more knowledge on the political issues of our time. I’ve had the pleasure of interviewing a variety of authors and political figures on Yahoo News Live, many of whom have published highly relevant books that add unique insight to the 2016 election.

While these books might not be the most obvious choices — for those, pick up Hillary’s Hard Choices or Trump’s Art of the Deal — all of them shed light unto the complexity and evolution of politics past and present to inform those of the future.

In February, I spoke with Washington Post columnist and author E.J. Dionne about his book Why the Right Went Wrong: Conservatism–From Goldwater to the Tea Party and Beyond.

“The [Republican] party has shed so many of its moderate voters,” Dionne explained, as well as repelling some of the liberal voters it once had. This internal rift is in part due to the fact that, Dionne says, “Republican politicians have made a series of promises they have not been able to keep.”

According to Dionne, the Tea Party and the right-wing rebellion we are witnessing during this election wasn’t initially directed against President Obama; rather, it began as a rebellion against George Bush, as many in the end were not enthusiastic about the Iraq war.

As for Donald Trump, Dionne attests that Donald Trump’s popularity “reflects the radicalism that the leadership of the party promoted and didn’t expect to get out of hand this way.” Why the Right Went Wrong is an essential read for those looking to understand how the conservative movement has become what it is today.

2. Robert Gates, A Passion for Leadership

Americans across the political spectrum today share a strong distrust of the government. Some say it’s too large, too corrupt, too rich, too inefficient — but Bob Gates, former Secretary of Defense, argues that with the right reform, big institutions can change to serve the people and regain trust.

Gates’ book, A Passion for Leadership: Lessons on Change and Reform from Fifty Years of Public Service, provides instruction on what smart and committed leadership should look like across the private and public sector. Having lead both the CIA and Department of Defense, Gates offers an inside look at how such institutions can be transformed.

From A Passion for Leaderships, readers may learn more about what it takes to be not just a leader, but an effective one that can bring about positive change. This is critical information that may ultimately inform readers’ candidate choice.

3. Michael Hayden, Playing to the Edge

With political topics like terrorist attacks and mass surveillance bubbling up constantly in debates, everyone has an opinion on the limits and limitlessness of national security. General Michael Hayden’s book Playing to the Edge: American Intelligence in an Age of Terror draws from his experience as Director for both the NSA and CIA for a glimpse at the details behind national security decisions in the wake of 9/11.

“The theme of the book is that these are hard questions,” General Hayden told me on Yahoo News Live, “and there are always shades of gray.” Hayden’s book reflects on the decision to go to war in Iraq based on “an incredible false level of certainty” that Saddam Hussein had stockpiled weapons of mass destruction. He also discusses NSA surveillance and the Snowden leak, which he considers “the greatest hemorrhage of American secrets in the history of the Republic.”

Readers will be immersed in the depth and complexity of American intelligence in Playing to the Edge. As for the current election, Hayden worries that the rise of candidates like Trump and Sanders’ reflect the “primal scream” of voters, and will not translate into good policy.

Bestselling author Jane Mayer recently released a book called Dark Money: The Hidden History of the Billionaires Behind the Rise of the Radical Right. The book details the rise of the Koch brothers and other millionaires and billionaires that heavily influence American politics.

“‘Dark money’ is a term that’s used by political reporters,” Mayer explained on Yahoo News Live. “It describes the money where you can’t figure out who the donors are. It’s mostly going into organizations that claim not to be political but which actually are extremely involved in politics.”

The growth and audacity dark money, Mayer says, likely lead to the rise of Bernie Sanders and a Democratic push to limit campaign financing, which allows anonymous wealthy donors to dictate policy. Readers seeking to comprehend the invisible forces funding some of today’s candidates can learn about how it works and why in Mayer’s critically acclaimed book.

5. Juan Williams, We the People

Fox political correspondent and author Juan Williams, who I spoke with on Yahoo News Live on April 12th, recently published We the People: The Modern-Day Figures Who Have Reshaped and Affirmed the Founding Fathers’ Vision of America. The book takes a look at a new generation of American Founders, who honor the original Founders’ vision even while leading political revolutions that have reshaped the nation.

While men like Alexander Hamilton may have found the ideas of women in power and same-sex marriage abhorrent, they would be equally disdainful of America’s enormous national army, mass surveillance, and demagoguery a la Donald Trump, Williams argues. Issues including immigration, trade, race, and income inequality all trace back to our Founders; Williams follows these important threads back to their origin in his book.

Though not directly related to today’s candidates, We the People digs into the conversations that cycle in and out for generations of politics. The book, Williams told me, is “an attempt to explain how we reshaped America within the confines of our constitution and our spirit.”

An apolitical book with political undertones,  Love That Boy: What Two Presidents, Eight Road Trips, and My Son Taught Me About a Parent’s Expectations comes from veteran political author Ron Fournier. In the book, he explores the relationship between him and his high-functioning autistic son, Tyler.

Tyler’s enthusiasm for presidential history led to a Presidential Library tour and introduction to two presidents, George W. Bush and Bill Clinton. Their conversations with the boy informed Fournier’s own understanding of the compassionate side of our most recent presidents, which transcends party lines.

Fournier admits on Yahoo News Live that he believes that his son could run “intellectual circles” around Donald Trump. Even so, thanks to his observations of former presidents with his son, Fournier said that “voters need to remember that most of the people we have in these offices are in it for the right reason.”